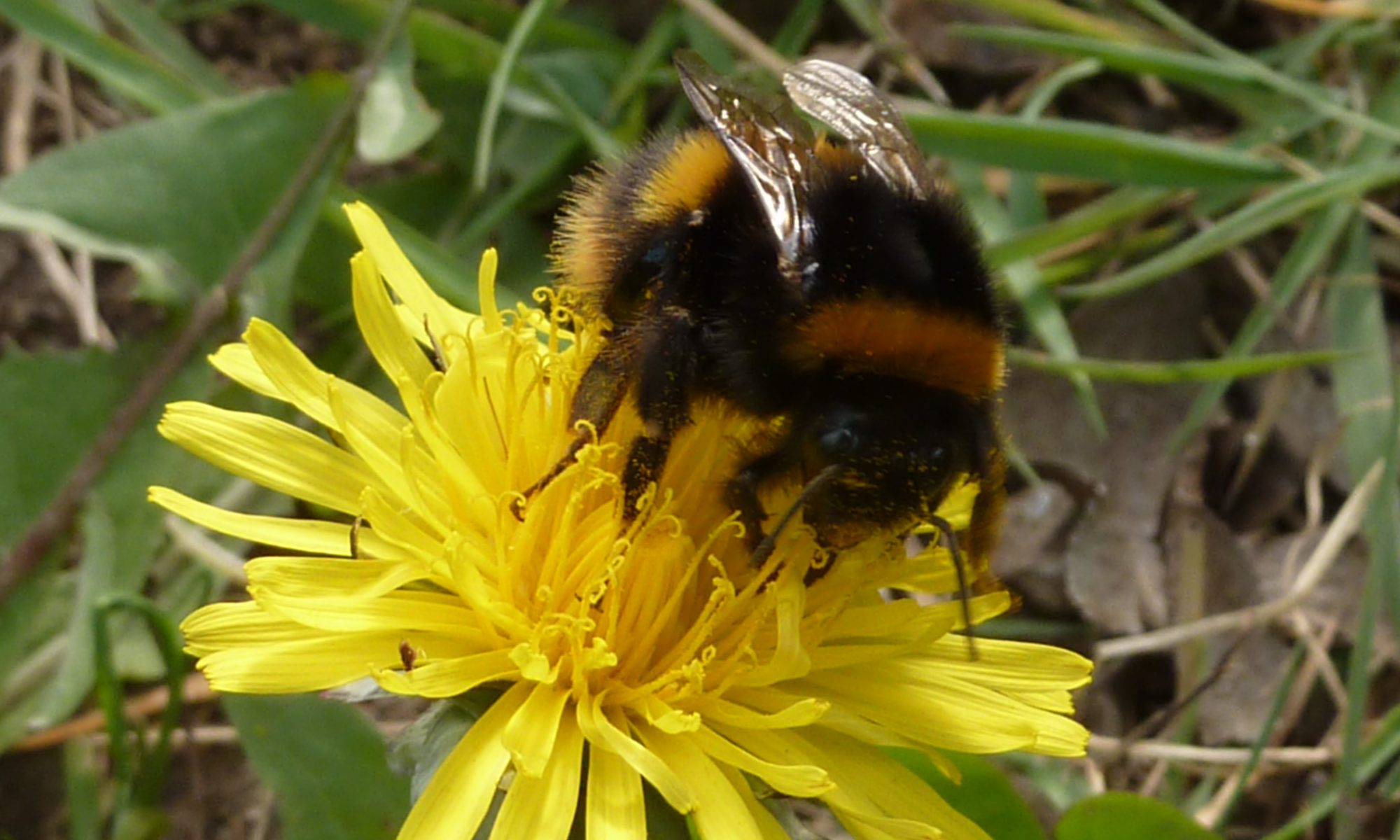 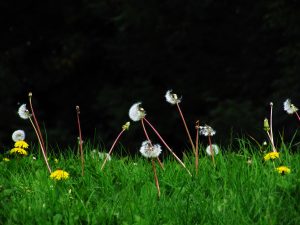 For most of us we can easily recognise any dandelion with its typical long dissected leaves and large composite flowers.  The large flower on one stem that we see  is actually hundreds of individual ones all held together within a green base called an involucre (‘a whorl, collar or ruff of bracts at the base of a flower-head’ -The Wild Flower Key).

I heard once, that if the dandelion was not seen as a weed it could be the perfect pests and disease-free perennial border plant with its large rosettes of leaves, a succession of large, bright flowers and attractive globes of parachutes! But alas, nobody seems to see it this way!

The sunny flowers are of course incredibly useful for a number of different pollinators including bumblebees, butterflies, hover flies, day flying moths and solitary bees.

Now as many of us might know, when we were  young and picked a bunch of those flowers for mum or harvested the leaves for the pet-rabbit, they would leave a sticky and very bitter tasting sap!

Well, this bitterness is due to the milky sap produced by several members of the large, former  Compositae, now Asteraceae family.

Many also have yellow flowers such as the Sow-thistles and when I was researching this I came across these interesting notes on the white sap in Romaine Lettuce:

“Cut or break the bottom of a leaf of romaine lettuce and you may see a strange milky liquid seep out from the stem where it broke off. While it may look a bit ominous, there’s no need for alarm.

What Is the White Sap?

The white sap is a milky fluid made of latex that’s naturally found in the lettuce and is completely harmless.

The botanical name for the substance is lactucarium, which comes from lactus, the Latin word for milk (the botanical name for lettuce is lactuca sativa, which also stems from this word). The white sap is a little bitter and, interestingly, has a sleep-inducing compound. Ancient varieties actually contained a much greater amount of this sap, so much so that Romans served lettuce at the end of a meal to relax and encourage sleep.

Over time, the amount of sap in lettuce has diminished, so there’s no need to worry about that Caesar salad putting you to sleep. If you do notice a little white liquid coming out of the base of your cut or broken romaine lettuce, while it may taste a bit bitter, it’s completely safe to consume”.

A lot has been written about this sap or latex and I came across yet another interesting article:

“Dandelions are troublesome weeds that are detested by most gardeners. Yet dandelions also have many insect enemies in nature. However, they are able to protect themselves with their latex, a milky, bitter-tasting sap. Scientists at the Max Planck Institute for Chemical Ecology in Jena, Germany, and the University of Bern, Switzerland, have now demonstrated that a single compound in the latex protects dandelion roots against voracious cockchafer larvae. Thus, latex plays a crucial role in dandelion defence against root feeders. (PLOS Biology, January 2016, Open Access)”.

The sap or latex is found in about 10% of the Flowering Plants but:

“The scientists found the highest concentrations of the bitter latex in the roots of dandelions. Dandelions need to protect their roots very fiercely because these are the main storage organs for nutrients which fuel growth early in the spring.”

It is a well-known fact that the leaves especially in spring are a good spring-tonic and in fact keep you healthy throughout the year. The bitterness can be altered by blanching the leaves under an old-fashioned terracotta pot which is heavy enough not to get blown over but the blanching will also reduce its health benefits.

Another very good website can be found here and below where I have underlined their important facts for quick reading!

Gathered early, after the spring’s first warm spell, the leaves and roots are used as a spring tonic and to stimulate digestion and vitality after a long winter.

Dandelion greens also have been used as a diuretic, an agent that promotes the loss of water from the body through urination. Their diuretic effect can make dandelion greens helpful in lowering blood pressure and relieving premenstrual fluid retention.

Dandelion roots contain inulin and levulin, starch-like substances that may help balance blood sugar, as well as a bitter substance (taraxacin) that stimulates digestion. The very presence of a bitter taste in the mouth promotes the flow of bile from the liver and gallbladder, as well as hydrochloric acid from the stomach.

Bitters have been used for centuries in many countries before meals as a digestive stimulant. Do you avoid bitter-tasting foods? Many people do, but this may not reflect a balanced appetite. According to Asian philosophies, the diet should contain foods that are sweet, salty, sour, and bitter. The few bitter tastes Westerners embrace are coffee, wine, and beer, which may have something to do with the higher incidence of digestive diseases in Western cultures, compared with Asian cultures. Dandelion leaves are also rich in minerals and vitamins, particularly calcium and vitamins A, C, K, and B2 (riboflavin).

Besides the stimulating bitter substances, dandelion roots also contain choline, another liver stimulant. Dandelion roots make wonderful colon cleansing and detoxifying medications because any time digestion is improved, the absorption of nutrients and the removal of wastes from the body improve as well.

Many people could use a little extra support for the liver: We are inundated daily with chemicals and substances that the liver must process. The liver must filter impurities from the bloodstream — all the car exhaust, paints, cleaners, solvents, preservatives, pesticide residues, drugs, alcohol, and other toxins we encounter can begin to tax the liver. Add a diet high in fat, which the liver must emulsify with bile, and a person could experience physical symptoms from this burden on the liver.

Rough dry skin and acne, constipation, gas and bloating, frequent headaches, and premenstrual syndrome are all potential symptoms of an overburdened liver.

Dandelions also are recommended for wart removal. The roots, stems, and leaves of the dandelion exude a white sticky resin when injured. Applied directly to warts daily or, preferably, several times a day, this resin slowly dissolves them.”

To quote “Every part of the dandelion is edible – leaves, roots, stems, and flowers. And the plants are nutritional powerhouses. The greens are rich in beta-carotene, fibre, potassium, iron, calcium, magnesium, phosphorus, B vitamins, and protein. Their nutrition profile compares favourably to kale and spinach and trounces iceberg lettuce, the most widely eaten salad green in the United States.”

The flowers of the dandelion also make a good wine: see for a recipe here:

The Dandelion is an important herb in the Biodynamic tradition where it is used as one of the ingredients to support good compost and the presence of the Dandelion improves all plant-life + soils in its surroundings.

Similarly in Permaculture the roots are great mineral collectors and lastly: